It was presented at the end of 1971, then, in March 1973 it finally arrived at dealerships with its “breath of fresh air”: 350 cc, 72 degrees V-twin engine, dry clutch and 6-speed gearbox, electronic ignition, high speed distribution. rods and rocker arms with camshaft driven by toothed belt, dry clutch, “Heron” type combustion chambers. Many technical solutions are the consequence of the experiments carried out by Franco Lambertini, a technician recently hired by Morini, on the multi-victorious Corsaro regularity engines.

The technician had also developed his project using the principle of constructive modularity: an engine capable of evolving towards larger displacements, smaller ones or for single-cylinder versions. Some elements certainly benefit the sales in Italy, the numerous requests are met with difficulty by the manufacturer. Someone said that some dealers even sold 7/8 Morini 3 ½ for day.

The first model called 3 ½, commonly known as GT or Strada for the foreign market, is followed by a more performing “SPORT”, characterized by a lower set-up, more powerful engine, half handlebars, aluminum rims and other details. Over the years, this model is constantly updated in the engine and chassis following the fashions of the moment, up to what can be considered the last example of the series known as K2.

Lambertini’s project was very healthy, however, as often happens, unexpected events happen in the transition from prototype to series production: the 200 vehicles of the first series had connecting rod screws that broke due to incorrect processing. It is a hard blow, but the factory reacts promptly by replacing the complete engines under warranty: “customers must be satisfied”, this is the priority of the management. The gear forks, made of molded and anodized light alloy, wear out easily too, so they are therefore replaced with other bronze equivalents.

The gearbox, on the other hand, has problems with gears: it is quickly redesigned to create one of the best and most robust gearboxes on the market. Small but continuous improvements to which the engine has been subjected over time and the chassis confirm the goodness of the initial project. We remember the interposition of a thick gasket between the engine head and the metal intake ducts and the subsequent replacement of the metal ducts with rubber ones to improve some difficulties encountered during start-up.
Even the studs of the rocker arm are reinforced by increasing the diameter of the thread in the head and the flywheel magnet replaced with a new model equipped with cooling fins and a higher generated power. The chassis, a continuous double cradle, on the other hand, has no defects, only a few cracks in the attachment of the electromagnetic tap of the tank which is moved out of position and the sheet metal of the tank reinforced.

Road holding and driving precision are benchmarks as well as performance. The introduction of a front disc brake as early as the end of 1976 contributes to improved braking. Today the models with spoked wheels and drum brake are particularly sought after by collectors and admirers of the Morini brand.

In the last years we have witnessed a race towards this motorcycle, often driven by the charm of the spoked wheels of the first versions that actually have a greater appeal, even if the best functionality is of the latest series that had solved the problems of youth. Also interesting is the presence of numerous fans of this Morini around the world, in particular the English and Germans.

We often see Morini 3 ½ circulating in Italy with foreign plates: adventurous enthusiasts who visit the beautiful country with the youth bike. Others, on the other hand, take part in numerous long-distance historical re-enactments, demonstrating the reliability of these motorcycles.

We invite all owners of the Morini 3 ½ to register their vehicle in Motociclo Italiano, we consider you true ambassadors of Made in Italy in the world. Also in this case Motociclo Italiano wants to give value to those who jealously guard their Italian vehicle in the garage, achieving objectives of knowledge and aggregation. 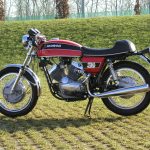 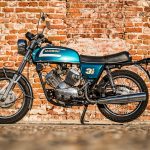 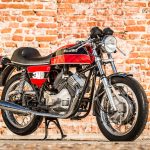 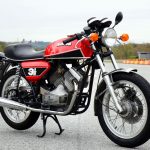 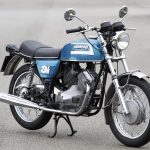 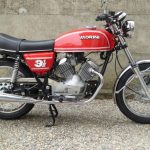 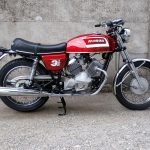